I have been working on a web app using Compojure, Noir, and Hiccup. I usually run both lein repl and lein run concurrently and use either IntelliJ or Aquamacs (Mac Emacs) as a code editor. If I am working on a small bit of new code and experimenting a lot, then Aquamacs + nrepl works well for me. If I have my MacBook Air plugged into a huge monitor sometimes I run lein run and a LeClojure repl inside IntelliJ and detach a few edit panes as separate windows - so many nice choices for development!

I don't really like debuggers because getting into the habit of using them can end up wasting a lot of time that could be spent writing unit tests, etc. That said, I was looking at some Ruby code I wrote for a customer but have not deployed and it occurred to me to try the RubyMine debugger which worked very well and generally didn't get in my way or waste too much time manually stepping through some code.

So, I decided to spend a little time trying IntelliJ LeClojure's debugger on my Clojure project: 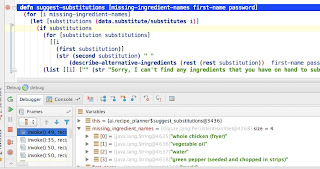 I wrote a little stub file to run as the debug target "script":

I placed this file in the top level project directory so the relative path for loading required data files is set up OK. Also, I had to change the default run/debug option to not make the project before running - this is necessary since I have top level expressions that initialize data from reading data files, and the Clojure compiler is not run from the project directory so I would get build errors. You probably will not have that issue with your projects.

One thing that is cool about running the app in the debugger is that the LeClojure plugin also starts a repl (see the second tab at the bottom to the screenshot) that shows all debug println print outs and provides a repl without having to start a separate process.

I don't think that I will use the debugger very often (again, using a debugger to understand and debug code is usually not the best use of time) but it is cool to have another tool. That said, I might find that always running in the debugger and only setting breakpoints on the rare occasions that I need to better understand what some code is doing might work well. I will try this mode of development for a few hours a week as an experiment.

Popular posts from this blog

March 24, 2021
I prototyped a simple natural language question answering demo in about 90 minutes. I accept a query like “where does Bill Gates work?”, find the likely URI for Bill Gates, collect some comment text for this DBPedia entity, and then pass the original query to the transformer model with the “context” being the comment text collected via a SPARQL query. I run this on Google Colab. Note that I saved my Jupyter Notebook as a python file that is in the listing below. Note the use of ! to run shell commands (e.g., !pip install transformers). # -*- coding: utf-8 -*- """DbPedia QA system.ipynb Automatically generated by Colaboratory. Original file is located at      https://colab.research.google.com/drive/1FX-0eizj2vayXsqfSB2ONuJYG8BaYpGO **DBPedia Question Answering System** Copyright 2021 Mark Watson. All rights reserved. License: Apache 2 """ !pip install transformers !pip install SPARQLWrapper from transformers import pipeline qa = pipeli
Read more

February 18, 2020
Here are some of my of my recent notes that might save you some time, or teach you a new trick. I have had good results using the py4cl library if I wrap API calls to TensorFlow or spaCy in a short Python library that calls Python libraries and returns results in simple types like strings and dictionaries. I just committed a complete example (Python library and Common Lisp client code) to the public repo for my book  Loving Common Lisp, or the Savvy Programmer's Secret Weapon that will be added to the next edition of my book. Here is a link to the subdirectory with this new example in my repo: https://github.com/mark-watson/loving-common-lisp/tree/master/src/spacy I frequently make standalone executable programs using SBCL and I just noticed a great tip from  Zach Beane for compressing the size of standalone executables. Start with rebuilding SBCL from source to add the compression option; get the source code and: ./make.sh --with-sb-thread --with-sb-core-compression sh in
Read more

October 22, 2020
I retired (my last job was Master Software Engineer and the manager of a deep learning team at Capital One) a year ago April and was enjoying time with friends and family, doing personal research in hybrid AI, lots of writing, and volunteering at our local food bank. I stopped my volunteer work with COVID-19 and welcomed the opportunity last month to start work at Olive AI  working on a very strong Knowledge Graph team. I believe in their mission and the work and the people are great! It is refreshing to leave the deep learning field, at least for a while. My heart is in developing stronger AI that can explain its actions and adapt flexibly to help people in their lives. I always take a humans-first stand on technology. AI systems should help us get our work done efficiently and remove tedium, allow us more time for creative activities, and generally enjoy our own humanity.
Read more